Sales of Scottish oysters are predicted to soar in this year’s run up to Valentine’s day as the “food of love” makes a prominent appearance on menus all over the UK.

Last year, the number of oysters sold by the Scottish Shellfish Marketing Group (SSMG) experienced a more than fourfold increase during the run-up to Valentine’s Day.

Stephen Cameron, managing director of SSMG, said: “In a normal week we sell around 35,000 oysters to our multiple retail and other customers, but last year this soared to 160,000 oysters in Valentine’s week.

“Oysters are not only delicious but they are low in calories, around 65 calories for six oysters, and are loaded with a host of vitamins and minerals such as iron, copper and zinc, the latter being credited with increasing the libido, possibly why Casanova was reputed to eat 50 for breakfast every day!”

Oysters can be purchased fresh from the supermarket or fishmonger. Cameron says: “Once you have bought them, keep the flat shell facing upwards so that the juices collect in the lower shell, wrap in a tea towel and store in the fridge until time to serve.”

In Shakespeare’s ‘The Merry Wives of Windsor’, the character Pistol famously exclaimed: “Why then the world’s mine oyster/Which I with sword will open.” But on a slightly less flamboyant note Cameron advises that the easiest way to open an oyster is to use a proper shucking knife and a tea towel to hold the shell.

Cameron adds: “If you are not quite sure about eating oysters in their raw form they are also delicious cooked in a number of different ways, one of the most famous being Oysters Rockefeller”.

Sales of Scottish rope-grown mussels are also predicted to increase during Valentines’ week as consumers look something a little more indulgent and special when eating out or at home.

“The wonderful thing about mussels is that they are so versatile in the kitchen and are quick and easy to cook,” said Cameron. “Mussels tick all the right boxes when it comes to a special menu treat.”

SSMG is a co-operative of mussel and oyster farmers located on the West coast of Scotland and Shetland. The business supplies the multiple retail and foodservice sectors with high quality live and value-added shellfish products through its modern processing facility based in central Scotland. 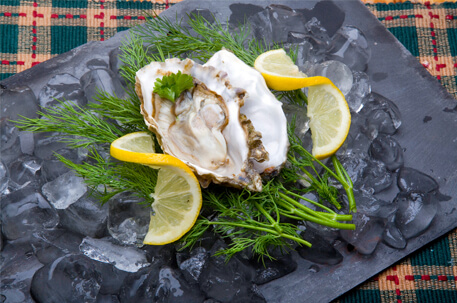 Time to catch up on those jobs

Our rope-grown mussels are seriously good for you!
Scroll to top